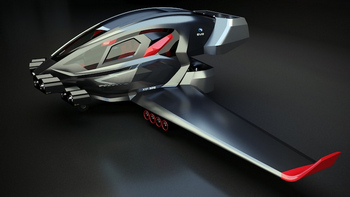 EVA calls its X01 "The world's first compact, all electric vertical takeoff and landing jet," and company CEO Olivier Le Lann, on hand at the show, claims his company will begin providing autonomous air-taxi service in its hometown of Toulouse, France, as well as in two Asian cities by late next year. Autonomy is enabled by a sensor suite of 77-GHz radar, lidar, and 12 cameras (in addition to the various navigation equipment and transponders all modern aircraft employ). Flight-system redundancy is provided by three onboard systems utilizing different programming languages, two of which must agree on every action. Flight is enabled by 26 electrically powered ducted-fan jets that are said to create only 70 dBA of noise on the ground and to be inaudible in flight. Vertical takeoff and landing capability negate the need for lengthy runways (a 107-square-foot parking space is all that's needed), but once airborne, the X01 unfolds wings that provide vastly more efficient lift when traveling horizontally. A few rear-mounted engines are dedicated to vertical thrust and serve to stabilize horizontal flight; the wing-mounted jets only provide horizontal thrust, while those mounted to the front canards tilt to provide both vertical and horizontal thrust. Vertical motion requires vastly more energy than horizontal travel, so the onboard 270-kW-hr battery pack involves two different lithium-ion chemistries, one optimized for energy, the other for power. Combined they enable the mostly carbon-fiber craft to carry a 500-pound payload at speeds up to 400 mph as far as 200 miles. EVA envisions a battery-swapping scheme to maximize the X01's in-service time. Le Lann reckons that per-trip taxi charges can remain competitive with ground-based taxis because the X01 can make many more trips per hour and has no human driver to compensate. The price is estimated at 250,000 euros ($283,000). 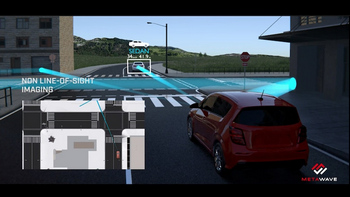 Most automotive radar systems today scan the distance across a preset beam width and height, sensing the distance to any object detected and a determination of whether it's moving or stationary, but providing little or no definition of what that object is. Metawave uses the same 76-81-GHz W-Band radar, but when its Warlord onboard intelligence detects an object, it instantly refocuses the beam as small as 1 degree up and down to "interrogate" the target object. The intense beam provides a high-definition, almost lidar-like image of the object. Other tricks up Warlord's sleeve include deep learning and object discrimination, localization and mapping, and an ability to bounce radar around corners and potentially detect an object that's out of sight like cross traffic. This technology also serves to increase the distance at which the radar can discern objects, to a quarter mile or more. Metawave expects to have prototypes available for sensor-fusion development work by the second quarter of 2019 with fleet testing in the 2020-2021 time frame. 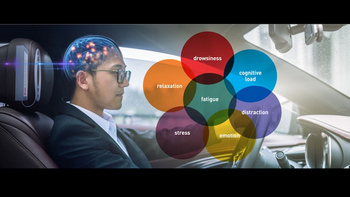 Freer Logic's Neurobiomonitor headrest claims to provide real-time brain-wave data without requiring any contact with the occupant's head. It works when the head is within 6 to 10 inches away. It senses 100-nanovolt waves like an EEG, magnifies them, filters them by wave type (delta, alpha, theta, beta), and interprets them to infer fatigue, drowsiness, cognitive load, distraction, emotion, stress, and relaxation. Company president Peter Freer claims his Neurobiomonitor headrest can determine drowsiness as much as 4 minutes before one's eyes begin drooping or drifting, giving his technology a leg up on camera-based drowsiness detectors. In addition to providing Level 3 autonomy systems info about the driver's readiness to resume control, some companies are considering using it for other purposes like choosing navigation routes that result in lower measurable stress, or offering to change the cockpit environment when stress is detected. I gave the headrest a "test drive" and was indeed able to alter the wave readings via relaxation breathing, and it clearly registered distraction when I manipulated my phone. The system is ready for deployment, at an estimated cost of about $9 per headrest. 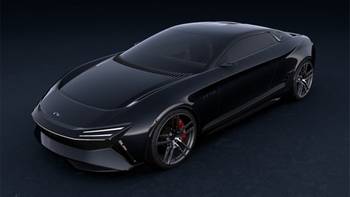 The same technology that renders fantastic imaginary worlds in lifelike detail in the movies is becoming more and more useful to the car industry. Various plug-ins for the software—which can run on 35 platforms, including iOS, Android, Xbox, PlayStation, Hollow Lens, Magic Leap, and more—allow auto part design data from Catia, SolidWorks, and others to be quickly converted from the solid surface models the engineers create to the polygons the gaming world uses. Once in this form, engineers can use virtual-reality environments to test fit parts, test for repairability, zoom in and out of assemblies, etc. Marketing teams can film commercials with absolute photorealism before cars are finished to a state sufficient for photography. Service technicians and assembly line workers can be trained on how to fix or assemble a car using virtual reality. Interior designers can assess the appearance of hundreds of materials in a lifelike interior with sunlight streaming through windows before the first part is tooled. And customers can view multiple car configurations before placing an order. Much of this has been possible for some time, but the Unity gaming platform is simplifying and democratizing these capabilities.