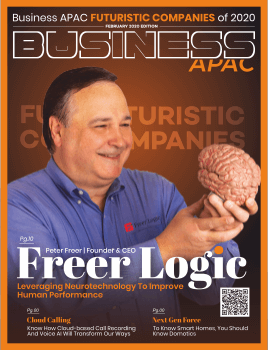 As the list of technologies grows every day, the world is transforming existing businesses and personal lives. These technologies have the potential to ease people’s lives and improve their personal and business dealings. Companies and individuals who do not follow some of the big tech trends run the risk of being left behind. Understanding current trends will allow individuals and businesses to plan and seize opportunity. One such extraordinary leader who is looking ahead and identifying the most important trends is Peter Freer, the Founder, and CEO of Freer Logic. He strongly advocates that the seemingly impossible can be achieved with the right passion and dedication. Through Freer Logic, he is implementing ideas that once seemed impossible to execute.

A Pioneer in the Field of Neurotechnology

The futuristic company has bleeding edge neurotechnology to monitor drivers’ brains to improve their cognitive performance, safety and provide enriching entertainment. The technology consists of a contactless brain monitor that is discreetly incorporated into the headrest. This removes the need to wear cumbersome and invasive headsets that have been dismissed by most in the industry. Freer Logic’s technology is geared towards an autonomous future recognizing human emotion and cognitive states to change the car’s ride and environment and to aid the driver with services. Imagine a car that says, “I notice you are stressed. May I play some relaxing music? Adjust the temperature? Change your seat position?” or, in autonomous driving, “We are approaching your destination. It’s time to wake up. Shall we play a game to put you in a peak performance state before you make your presentation?”

A Pertinacious Leader behind the Company Success

Peter established Freer Logic with a mission to provide disruptive neurotechnology that enables people to access and control the most valuable asset they own—their brain. Previously, he worked as the CEO of Unique Logic and Technology and developed Play Attention, a training program for the attention deficit hyperactivity (ADHD) market. Play Attention is now the #1 neurocognitive training program for ADHD children and adults distributed globally in 10 languages.

His contributions to the field of neuroscience and its practical application in the field of education and human performance have garnered him seven patents with others pending. The forward-thinking leader has lectured on behalf of NASA at the National Space Society in Washington, DC as well as lectured at the United Nations in Vienna, Austria. He is co-author of a white paper on human performance with the International Atomic Energy Agency of the United Nations.

The role of the captain of a ship is to lead from the front and navigate through bad weather. Freer performs many roles including algorithm development, hardware development, app development, patent development, financial director, futurist, and far more. He is also responsible for adapting and evolving with the market as well as taking the company to a new height of success. As an innovator, Peter believes that the technology and apps developed by Freer Logic are future-proof from any upcoming challenges. He shares, “The only limitation is our imagination. And we have huge imaginations.”

The team of Freer Logic are striving to provide quality products and solutions to their clients.  Currently, the skilled team is catering three verticals; automotive, consumer electronics, and training. In automotive, they create safety features such as drowsiness detection, cognitive load detection, distracted driving, and stress detection. It will grow to create emotional recognition algorithms, cognitive activities such as apps for mindfulness, apps for relaxation and apps for peak performance. As for the consumer electronics, it is an exciting field. Peter asserts, “Imagine offering clients the ability to control apps on their cell phone, tablet, or desktop by mind alone or enhancing their mental abilities through apps specifically designed to improve their lives.” For the training vertical, Freer Logic has trained da Vinci robotic surgeons, NASA, NASCAR, nuclear power operators, Olympic athletes, and many others.

Additionally, the APAC region is full of opportunities for companies to leverage and expand their footprint. Peter believes there is a huge expansion possibilities exist in the APAC market. Also, having strong relationships with the automotive industry, South Korea and Japan are the two countries that currently have the greatest benefit from Freer Logic’s technology.

Staying on Top of the Race

Currently, the market is crowded with competitors offering solutions for clients. To differentiate and stay ahead of market competitors, Freer Logic always innovates to deliver best of breed solutions. The company has developed an award winning discreet neurotechnology embedded in a headrest called a Neurobiomonitor (NBM). The headrest can monitor the brain of a driver or passenger without physically connecting to them. It also has the ability to detect simple head motions from the driver, such as yes and no. It also maintains system functionality to a distance of about 10 inches.

Every founder has a vision of the future, if only to imagine a world in which his\her company stands where there once was a void. Yet certain companies will play a completely outside role in deciding what’s next for us all. According to Peter, futuristic technologies have to be accepted by a market that is not aware of the technology and needs to be educated about the technology. Commenting on this statement, Peter shares, “A good example of this was Freer Logic’s presentation of cognitive games in an automobile. I initiated this subject 3 years ago and most automobile manufacturers just chuckled. However, this year I’ve been approached by 4 auto OEM who have asked me to make these apps (apps for mindfulness, relaxation, etc.) for them. Sometimes it’s difficult to be ahead of the curve.”

The future revolves around crazy ideas-bold, off-the-wall concepts that can help companies make a quantum leap forward and remain relevant in a changing world. Therefore, Freer Logic is planning surprise app for the millennial workforce that will enable them to have social connections that they never had before!